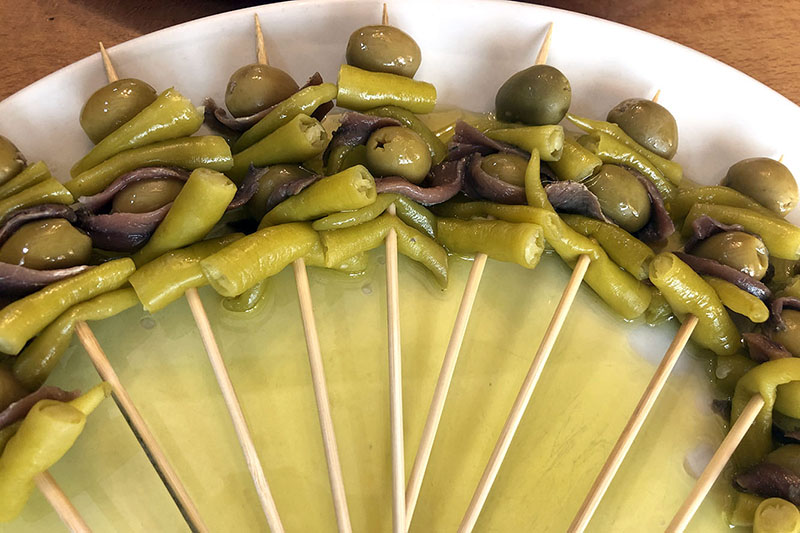 30 Nov What’s a “gilda”? Check out the Basque Country’s most popular pintxo

The gilda is one of the most popular pintxos found on bar counters in the Basque Country. It is “green [meaning “raunchy” in Spanish], vivacious and rather spicy. Like Rita Hayworth in her role as Gilda”, said the inventor of the pintxo in 1946, in due consideration of the similarities he saw in his creation to the actress in her highly acclaimed hot role. 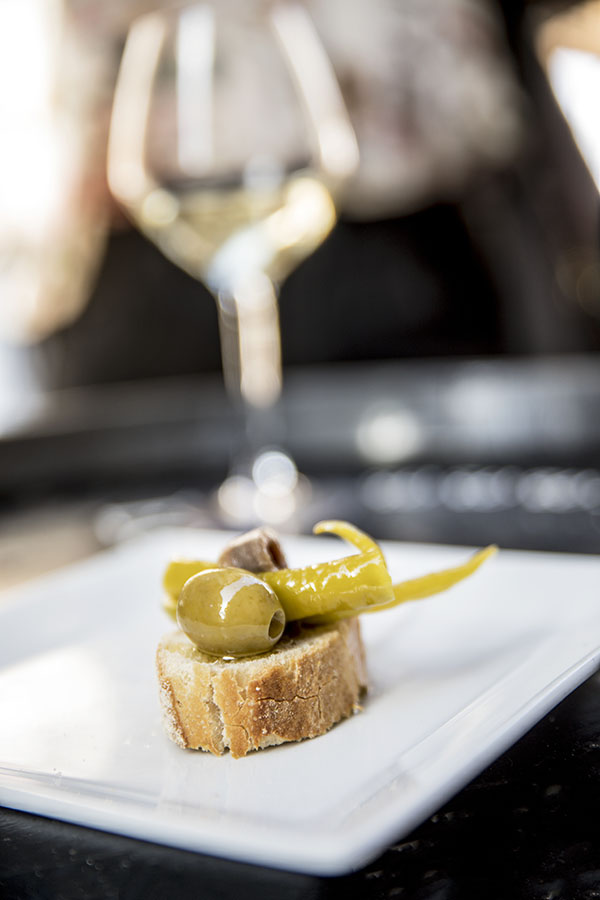 The man who invented the gilda was Joaquín Aramburu from Donostia, aka “Txepetxa”, a habitual customer of the Casa Vallés in San Sebastián. Txepetxa began to use a cocktail stick to skewer the green peppers, anchovies and olives he had been given along with the hand-held wine “porrones” served at the bar. The idea caught on with the other customers, and all that was left to do was to give it the suggestive name which, like the actress, caused an immediate sensation.

Gildas are still available at Casa Vallés, which is a veritable institution in San Sebastián, but it is also served up at many pintxo bars in Euskadi. In fact, this pintxo has now spread to other parts of Spain. And it is one of the most traditional and basic pintxos on any bar counter – with all due respect to potato tortilla. The gilda, as dictated by the basic principle of Basque gastronomy, above all requires good base products.

In this case the products are green peppers in vinegar, anchovies in brine, and green olives. In the old days there were only olives with stones, but nowadays the trend is to use olives with their stones removed. These are the traditional ingredients to which, once they have been firmly skewered, a generous splash of extra virgin olive oil is added to moisten the pintxo. 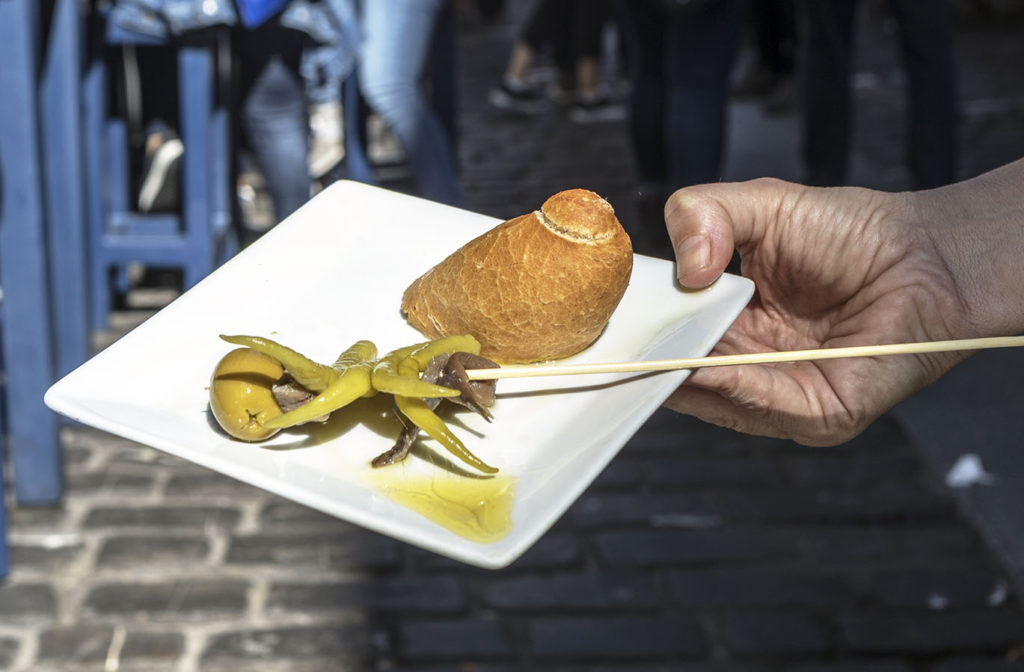 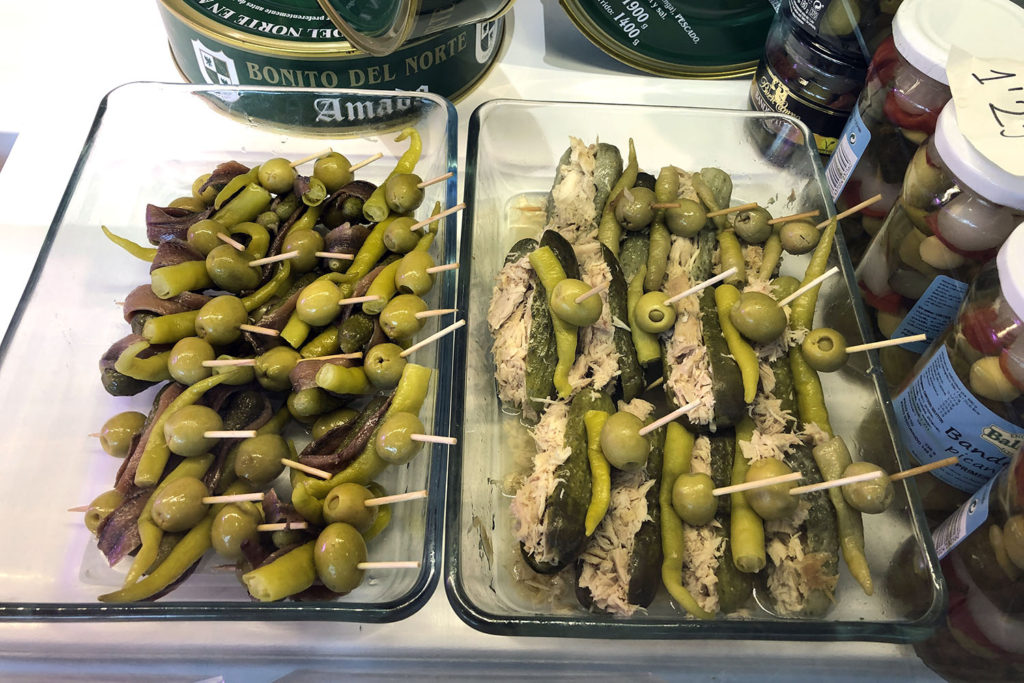 Over time, this pintxo has evolved to cater for the whims of every palate. And so nowadays, gildas have pickles, tuna, onion, anchovies in vinegar, quail’s eggs, and even black olives.

What time of day are gildas eaten? They’re pre-meal pintxos, eaten during the poteo or txikiteo, the usual drinks at several bars before lunch or dinner in the Basque Country. Some people feel a good gilda can be eaten at any time of day, although they’re normally displayed on bar counters at the end of the morning. Since they’re rather acidic, I recommend they be washed down with a nice vermouth. But there’s no accounting for taste concerning these combinations.

In any case, the most important issue is not to lose out on the chance to have a few gildas in Euskadi, one of the practically mandatory exercises during any Walk on the Basque Side worth its salt. Unless people really have something against pickled food, or refuse to eat it. Because if this recipe has one specific feature, that would be its force of character, as demonstrated by Rita Hayworth in Gilda. 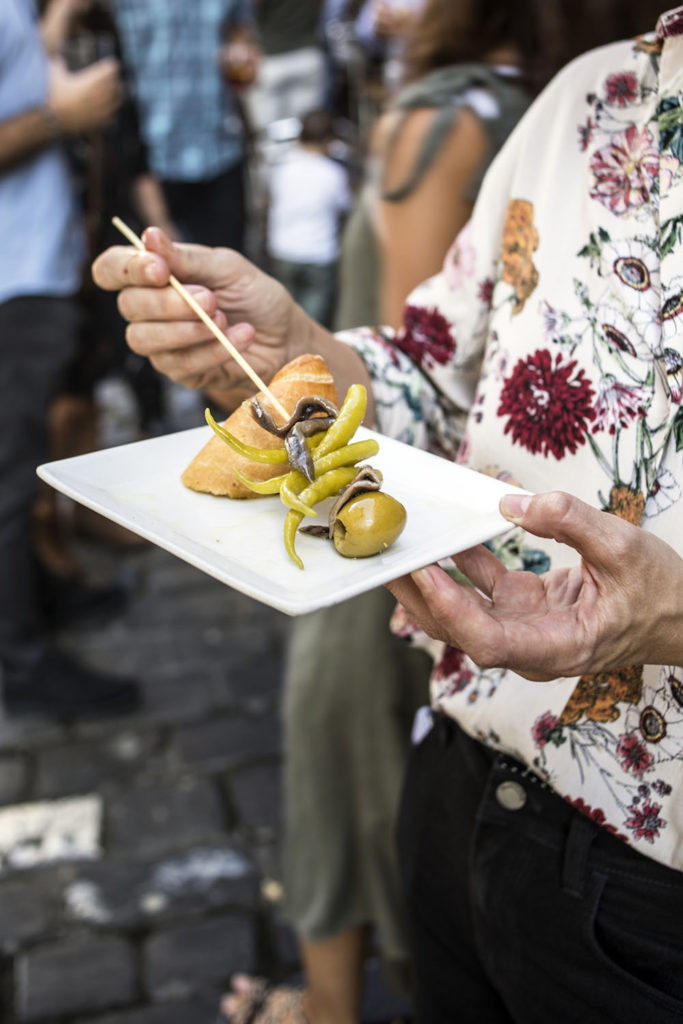