the pearl of the Cantabrian Sea

Taking a trip to San Sebastián (Donostia in Basque) means taking a dip in beauty. First there’s the natural splendour of this city, whose charms extend around its wonderful La Concha bay. Then we have a most seductive French belle époque architecture, which has been the high point of the city since it was taken up at the end of the 19th century as the summer holiday venue of Spanish royalty and diplomats from other countries. 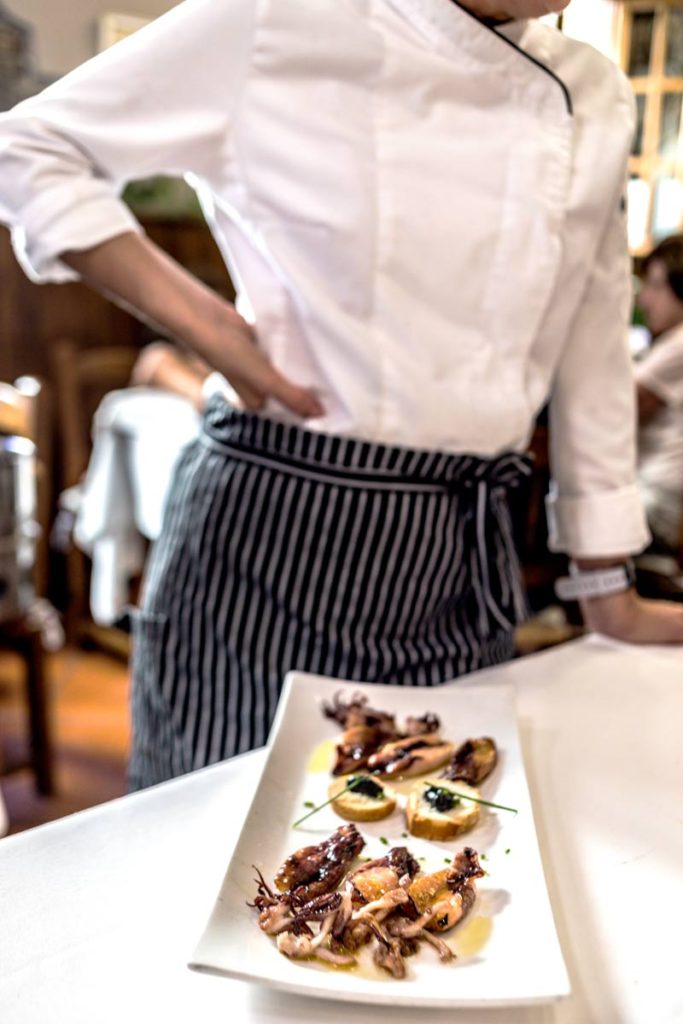 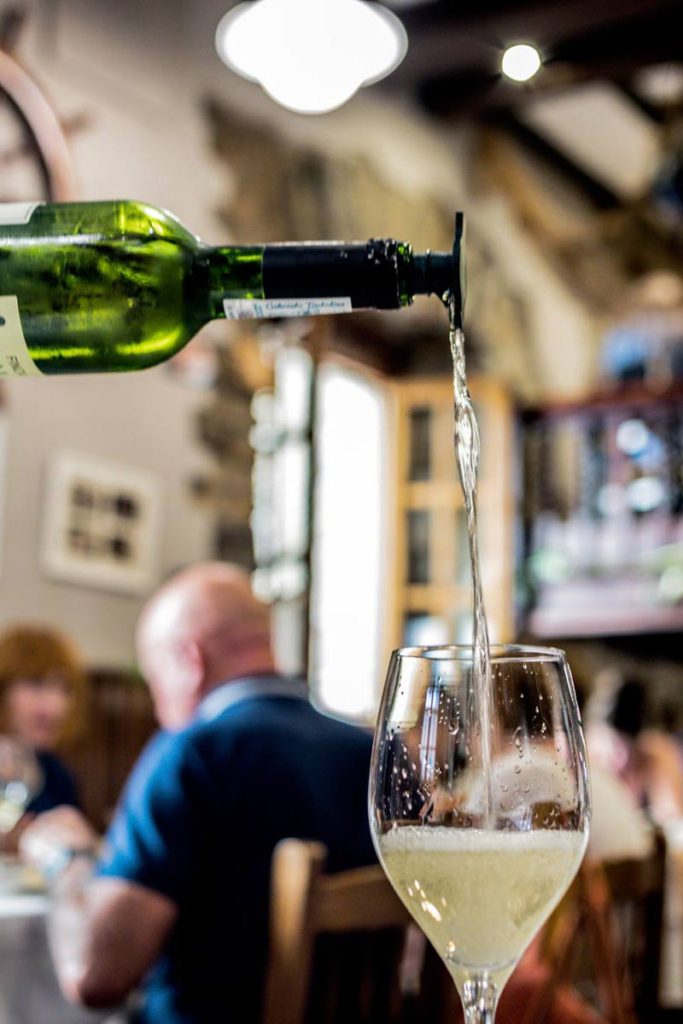 Its charms and beauty also include Basque gastronomy, which in Donostia has reached the dizzy heights of excellence, as the grand finale of any major visit. So, we’ll start our great day out in San Sebastián like any native “donostiarra” would do: down at the market, buying the fresh produce we’ll use later to cook traditional Basque meals in the kitchen.

With our purchases all packed up, it’s off to join the local population enjoying their daily constitutional along La Concha. With the sea to our right, we’ll walk next to the mythical railing fitted in 1910 during a comprehensive refurbishment of the La Concha promenade, in the city’s heyday following the arrival of Queen Isabel II. Her doctor had advised her to bathe in the sea to cure her herpes, and so gradually Donostia became a holiday must-go for the court. La Perla Spa and the Miramar Palace (the latter after the English style) also date back to this period, and we can see them during our walk too. 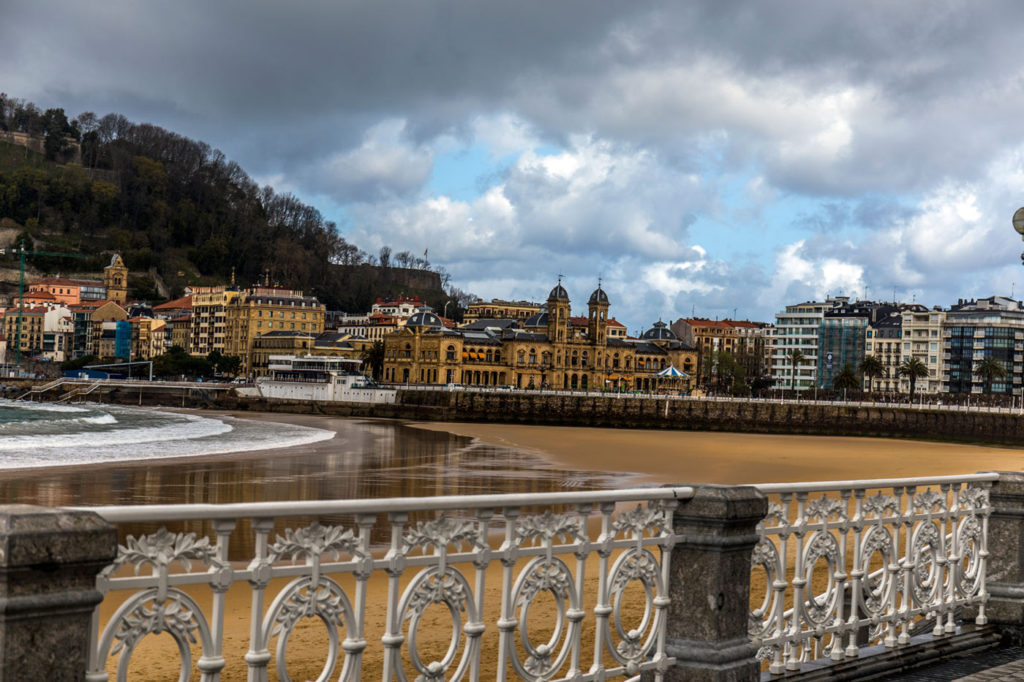 We’ll put the Spanish court’s stories on hold for a moment to gaze on one of the most famous pieces of innovative 20th century Basque art: the Wind Comb. This is composed of enormous iron sculptures by Eduardo Chillida at the western end of the La Concha, atop an architectural piece on the rocks designed by architect Luis Peña Ganchegui. This is one of those places where human beings feel they are blending into nature if they stand over the air holes (also water holes sometimes) and feel the gusts of wind whipped up by the waves as they break on the rocks and the sculptures. People come to watch the show whenever the sea is rough. 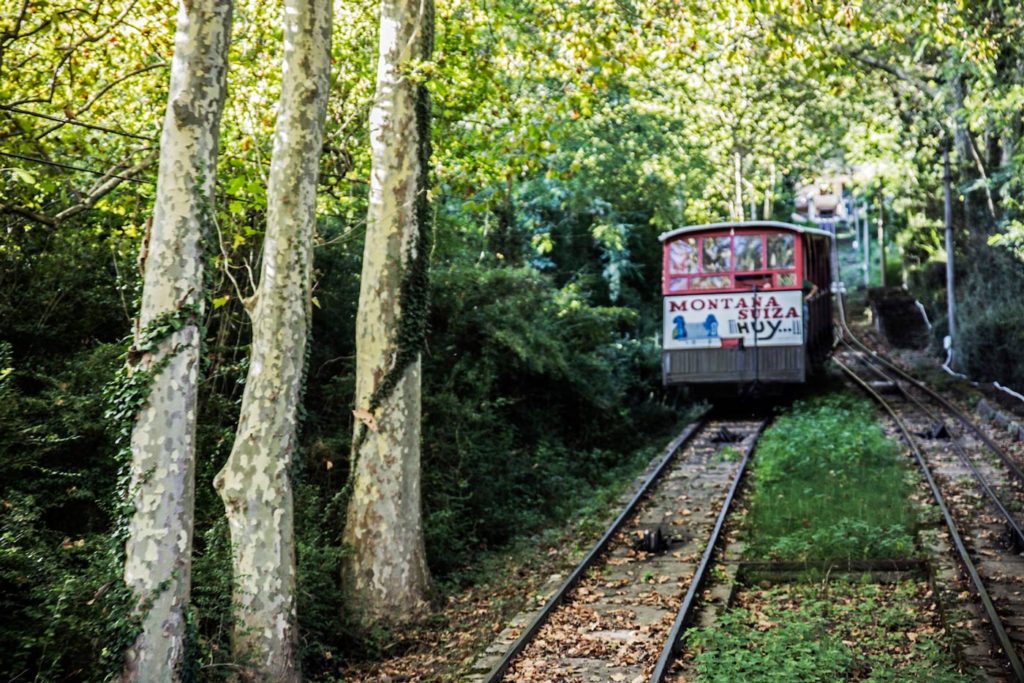 The departure time of the funicular will bring an end to the day’s first mystical episode. We’ll take this train to help us up to Mount Igueldo, and it also brings us back to our stories of the Spanish court, as it was the Queen Regent María Cristina who opened the funicular railway in 1912, when an amusement park was also opened at the top of the hill.

The Mount Igueldo Amusement Park boasts the best views over San Sebastián, and some twenty recreational options steeped in nostalgia, since their appearance has not been modernised in decades. The star attraction is the “Swiss Mountain” roller coaster, with its spectacular views of the coast. 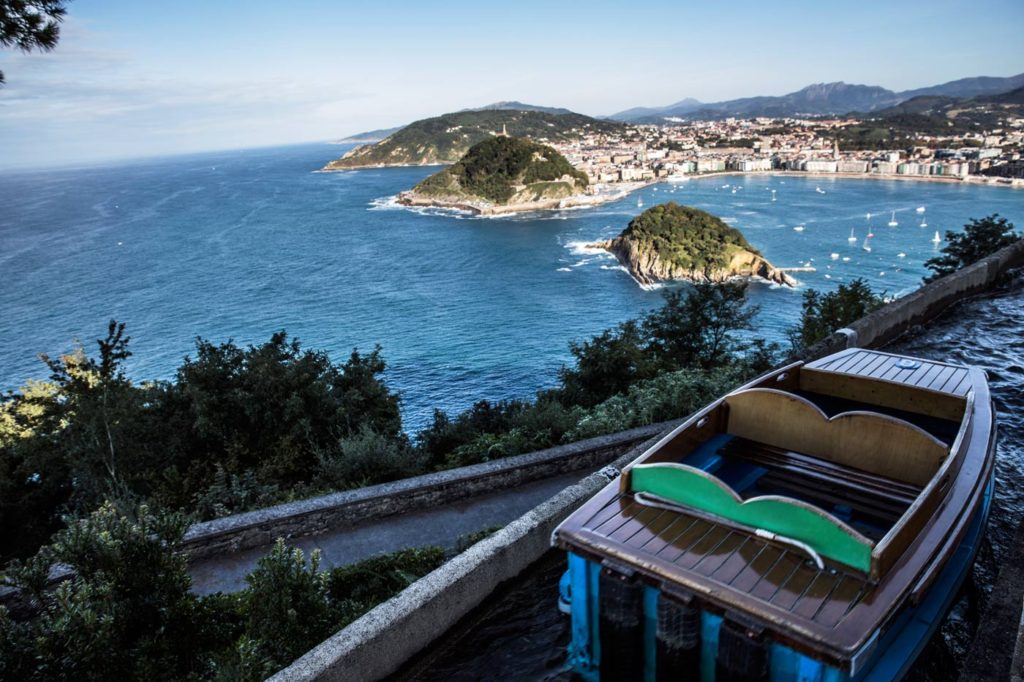 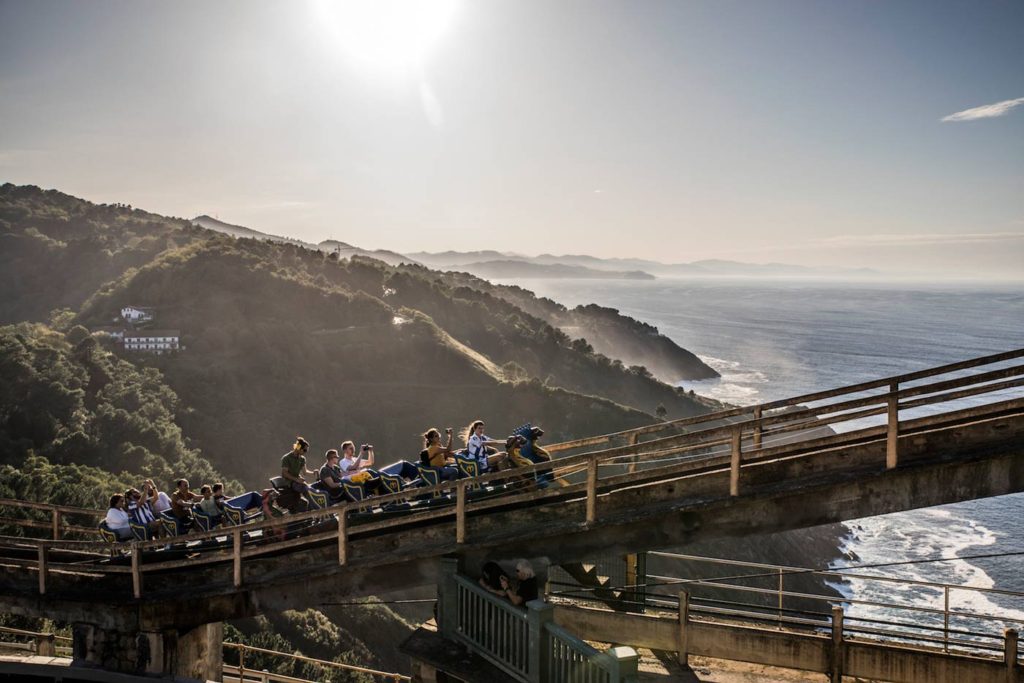 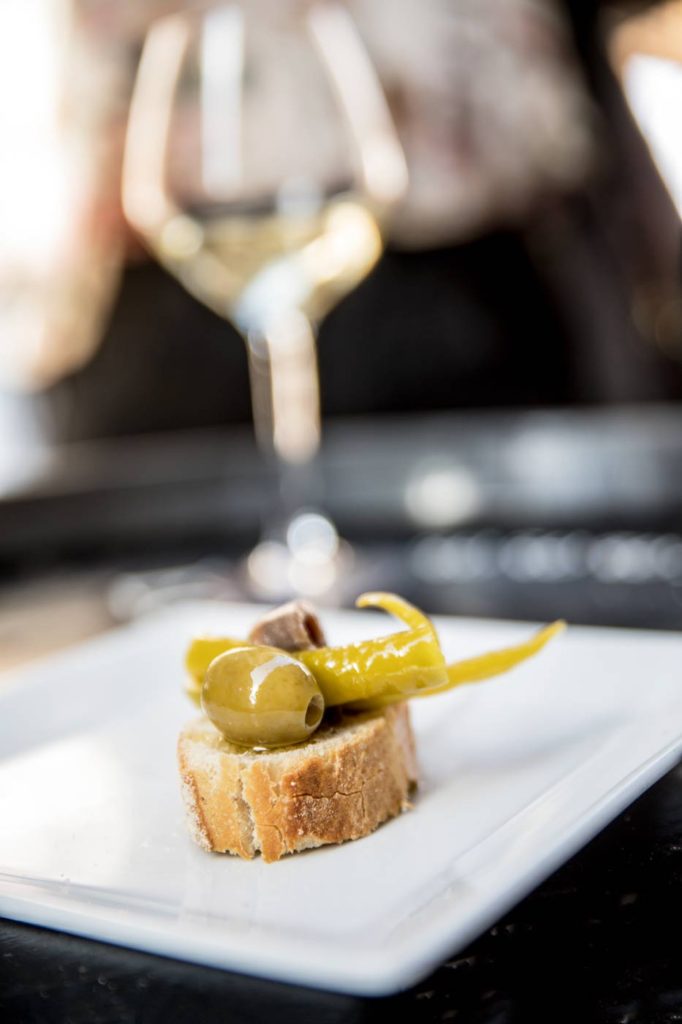 Our growling stomachs will gradually take us back to the present day, and so we’ll walk a short distance to have a drink with some marvellous views looking down on La Concha bay. This is where we’ll cook the food we bought first thing in the morning, which has been taken there for us. Those of you with more of a gourmet bent will realise that this is the second mystical event of the day. During this gastronomic stop we will not only eat the typical fare of the Basque coastline, but we’ll also learn how to make the pintxos that have brought such fame to bar counters in San Sebastián.

Pintxos are the famous mouthful-sized Basque snacks. They emerged in the 1930s, during the heyday of aristocratic summer holidaying in Donostia. The legend has it that these delicious eats were created in “La Espiga”, a bar near La Concha beach, still open to this very day. It invented this reasonably-priced option to bring in customers coming off the beach, which in 2017 was declared Best in Europe in the Travelers’ Choice awards.

What’s a “gilda”? Check out the Basque Country’s most popular pintxo

They were originally called pintxos because at the outset they consisted of a piece of food placed on a small piece of bread, and skewered through with a small cocktail stick. The huge variety of pintxos is on the increase, and now only some of them still have the cocktail stick. It’s quite usual to see the word written with “TX”, the spelling format used in Euskera. But you might also see it with the Spanish “CH”.

We’ll finish off our Donostia experience amid pintxos, typical Basque recipes, and the best panoramas of La Concha bay. Obviously these days you don’t need to have blue blood to enjoy a memorable day out in San Sebastián. 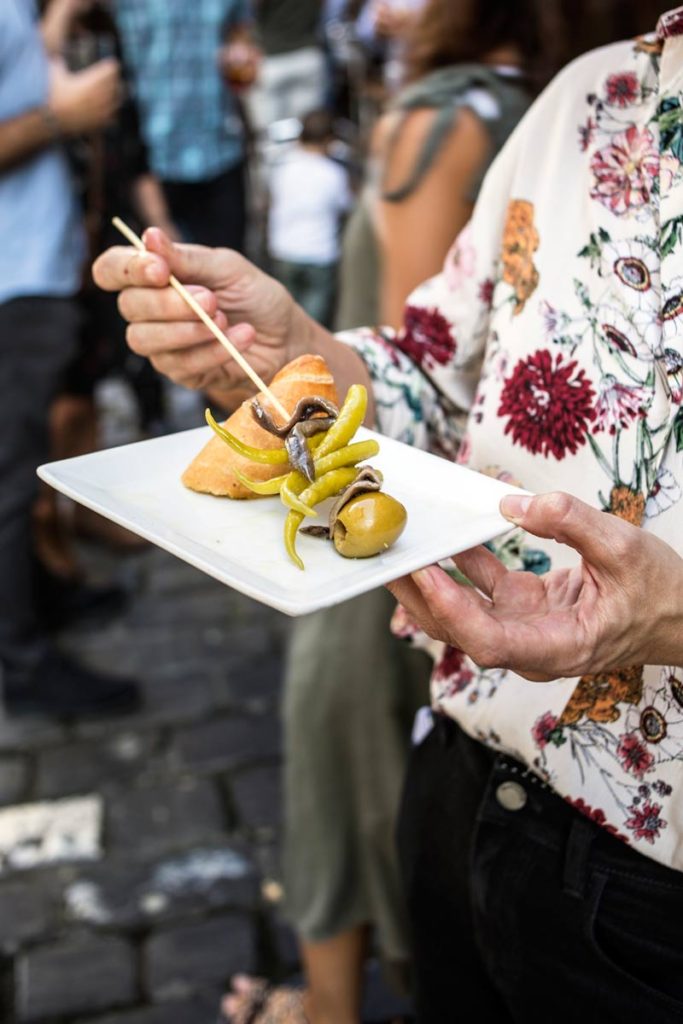